Not for the diseases their products cause when used as intended. Not for the deforestation caused by tobacco cultivation or the contamination of soil and water caused by chemicals used on tobacco fields. Even not for the obvious waste, toxic waste, the removal of toxic cigarette butts.

Cigarette and leaf tobacco companies don’t pay for this. The price of tobacco is paid by flora and fauna, on land and under water. It is paid by humans, in tobacco growing areas, on sea coasts, in cities.

Our German study “Ruined Nature” highlights how the tobacco business harms the environment.

In other words, when smoking cigarettes, the developed world is literally burning poorer countries’ resources. (Zafeiridou/Hopkinson/Voulvoulis 2018)

The ecological footprint of the tobacco industry has very different effects on regional and local level. Our study “Ruined Nature” [German] takes a closer look at places where the price of tobacco is being paid.

In the tobacco growing areas of Tanzania, forests are cleared to make way for new tobacco fields and to supply the tobacco barns with fuelwood. Mwita M. Mangora shows the magnitude of deforestation in the miombo woodlands and the consequences for the local communities.

Read here his chapter “Tobacco takes its toll on the miombo woodlands”.

In Bangladesh, agrochemicals – fertilizers, fungicides, pesticides – used in tobacco cultivation contaminate the fertile river banks and the water of Matamuhuri river. Farida Akhter demonstrates how tobacco is occupying agricultural land and which consequences local communities face due to the diminishing fish stock.

In Germany, cigarette butts are a major concern. They are littered although they consist of plastic and contain many toxicants. Susanna Knotz describes how the German coastline of the Baltic Sea is affected and which actions against this contamination are already taken on a local level.

The tobacco sector is an unsustainable sector in which sustainable production and consumption patterns (SDG 12) are not achievable,

because, by definition, SDG 12 is about products that bring a better quality of life while minimizing the use of natural resources and toxic materials, and the emission of waste and pollutants over the product’s life cycle. (Zafeiridou/Hopkinson/Voulvoulis 2018)

Nevertheless, there are options to minimize the damages – in tobacco growing countries, in countries with large cigarette manufacturing or with high smoking prevalence. These require financial resources. It is time to use the concept of Extended Producer Responsibility for the tobacco industry. Multinational companies in the tobacco sector must pay their share of the price of tobacco.

Measures to be taken include for example fees or taxes to finance afforestation schemes and support farmers to switch to alternative crops, restrictions for tobacco cultivation like minimum distances to rivers and other water bodies, or financial contributions to bear the cost of tobacco waste management.

There is absolutely no justification to destroy agricultural lands for a toxic plant that is a threat for life and livelihood. (Farida Akhter) 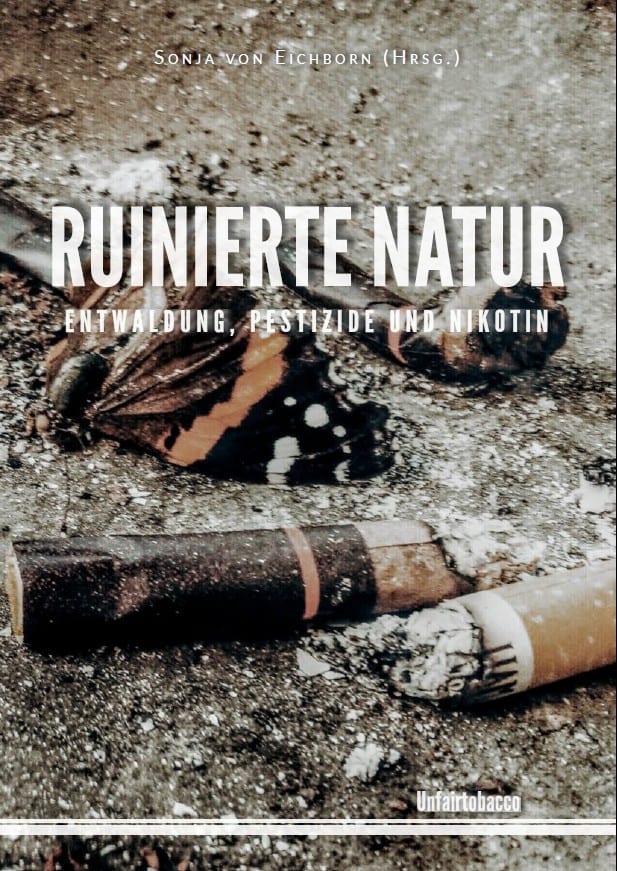 Poison for waterbodies: nicotine and pesticides

Our new factsheet shows the impact of tobacco growing, cigarette manufacturing and cigarette butts on water, waterbodies and oceans.

A German documentary shows: Cigarette butts not only harm the health of people, but also the health of the planet. Few people know, cigarette butts are hazardous, toxic waste. Unfairtobacco Director Sonja von Eichborn has been interviewed for this film.

How Tobacco Harms the Environment

Chemicals for monocropping, firewood to cure the harvest and toxic plastic waste. Read here how tobacco harms the environment.

Tobacco is an obstacle to sustainable development. Read here about how tobacco harms people and the environment and its impact on sustainability.

Tanzania: Tobacco takes its toll on the miombo woodlands

This article shows how tobacco cultivation drives deforestation in the miombo woodlands in Tanzania.

This article shows how tobacco cultivation contaminates Matamuhuri river and its river banks.